Being an ace, nifty, sexy writer, I have secrets. Secrets to teach eager plebs like YOU. This isn’t me talking down to you, oh no, just acknowledging that I have a duty as a fabulous, talented, humble writer (with tons of sex appeal) to pass on what I have learned to you lesser sorts. YOU’RE WELCOME.

So here’s an absolutely foolproof guide on how to be a writer. Feel free to send me nudie pics by way of thanks.

Step 1: Write. Ideally do a bit of planning before you set off, it’ll help. A lot. Oh I know, I know, you want to ‘find the story’  as you write, or you can’t be done being tied down and restrained by something as boring as a plan. You’re a fearless explorer heading out into uncharted territory with just a laptop, poor social skills and a double-chin for company! My advice is to get over that fast, you big silly, even if you only jot down a few vague ideas, or an end point that you’re moving towards. If you do, you’re going to find it much easier to start putting words down on the page, and that’s the most important thing. You can beat the terror of the blank page if you’re greeting it with a clear purpose in mind.

Now this doesn’t mean you have to stick to whatever plan you’ve sketched out (as brief or as in-depth as you decided to make it), it’s there as a motivator,  a safety net, some reassurance that you have some place to go if you so choose. Do some planning beforehand, you’ll be so happy you did in the long run.

Step 2: As you write your first draft, try not to get distracted by this picture: 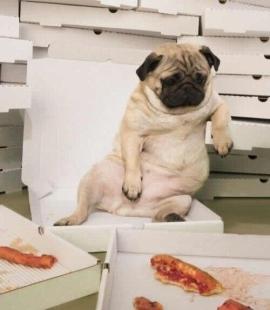 Step 3: WRITE FAST. Outrun the doubts. Just get the words down, pat yourself on the back about your word count at the end of each day, and get to ‘The End’ as quickly as possible. This is a first draft. Script or prose, doesn’t matter; plan, write fast, finish the thing. People get too concerned with slaving over every line, trying to get it perfect NOW. Don’t be like those poor saps inching their way at a snail’s pace towards a ropey first draft, realise the most important thing is just to get the story out, to reach the end. You can buff the thing up all pretty after.

Step 4: NOW you can enjoy this picture as a reward for finishing that first draft. LOOK AT HIM:

Why did he eat all that pizza? It wasn’t even his cheat day! 🙁

Step 5: Re-write that sucker. And again. And again. Nope, still not done: AGAIN. Repeat as often as you can stand. Ask people you trust for feedback if you like, it’ll help you to improve the thing if fresh eyes give it a once over, even if you don’t agree with what they have to say. New, unexpected opinions, good or bad, will get the wheels turning in your head once more, even if you think there’s nothing more you can do to the thing, no new ways to approach it.

Step 6: Send it out into the world and start again. And again. FOREVER (you can stop once you’re the special at the worm food cafe). Some of you will drop off at some point, it’ll feel like you’re smashing mush-first into a brick wall that you’re never going to be able to scramble over. Rejection and failure are a writers best pals and you better get used to setting a place at the table for them. If you can cope with that, you’ll be able to keep going. To those who persevere go the spoils (or not. No guarantees, bud.)

Step 7: Swim, Scrooge McDuck-like, in your fabulous riches*. (Warning swimming in coins claims the lives of eight writers a year, make sure you never attempt it on a full stomach (or without some sort of groin protector).

Step 7: Grow super resentful of lesser, hack talents who are hogging the limelight that SHOULD be yours. If only you had the jammy, lucky breaks they’d had! Drink heavily and alienate friends.

*That might just be me, the rest of you can just be happy that whatever level of success you achieve: YOU ARE A WRITER.